Barry Graham says he “gets goosebumps” when he visits Magnetawan Watershed Land Trust’s (MWLT) new conservation area, known as the Old Man’s Creek Reserve. The 240 acre property, with its landmark waterfall, and namesake waterway, was one of the first in Ontario to be transferred from American Friends to a Canadian partner organization. 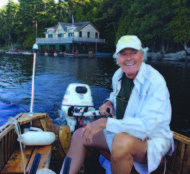 The lands and waters encompassed by the Reserve have been part of Graham’s life since he was an infant, and his family brought him from Rome, Georgia to their summer home on Ahmic Lake nearly 70 years ago. Graham, who is the
president of the MWLT board and now a resident of Washington DC, recalls canoeing across the lake to Old Man’s Creek.

Many other Ahmic Lake cottagers and local residents of the local community share fond memories of exploring this beautiful property. So there was widespread consternation when a developer bought the land and secured approval for a subdivision on the creek; threatening Ahmic Lake’s pristine water quality and closing access to the iconic falls.

To avoid destruction of their venerated retreat, area property owners formed MWLT to pursue its permanent protection. They were inspired by Ted Rouse, who promised to acquire the land and donate it for conservation if his neighbors created a conservation organization that could assist with a cross-border gift.

So it was that MWLT was one of American Friends’ early transaction partners, and Ted Rouse an essential early supporter. In 2012, he donated the majority of the land that is now the Reserve to American Friends. Since then MWLT has been managing the property to both preserve its natural qualities and make it available for visitors, young and old, to enjoy. 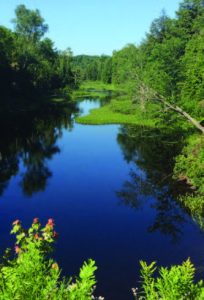 Graham reports that the public access has won fans from around the community, including elected officials who view the preserved land and trails as an asset for tourism.

Thanks to the generosity of Rouse and major contributors who acquired other parcels in the Reserve, and the efforts of volunteers from both MWLT and American Friends, Old Man’s Creek and the lands that surround it will remain undeveloped and as beautiful as Graham remembers them.