Seventy of the LTABC members have been named to the Honour Roll for their support of Canadian land trusts. Each person has contributed locally, provincially, national and internationally to conservation. John Peirce, the Vice President of AF’s board of directors, was one of the initial inductees of the LTABC Honour Roll.

American Friends is proud to acknowledge that Sandra Tassel, American Friends Program Coordinator and President of Look at the Land Inc, is one of the most recent inductees. 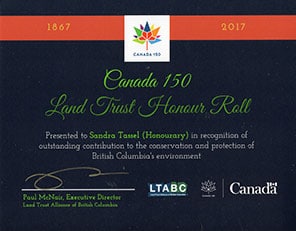