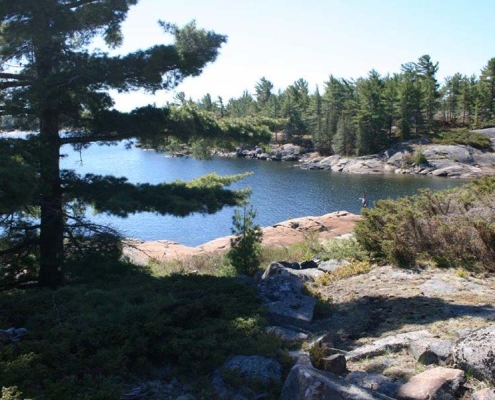 This scenic, developable and valuable property was owned by nine individuals, some Canadian and some American, all descendants of five area property-owners who acquired the island more than 60 years ago. The Canadians controlled 60% of the total ownership and the Americans 40%. Although all of the owners agreed they wanted to protect the island there wasn’t an organization that could accept tax deductible donations from both Canadians and Americans.

GBLT’s leaders knew the American donors could give to American Friends. However, they also knew that the Canadians would have the best tax outcome if they donated to GBLT through Environment Canada’s Ecological Gifts Program (EcoGifts).

To make the donation financially realistic for all the owners, GBLT and American Friends agreed to each accept the share of title belonging to the donors from their respective country. Despite this being entirely new for both organizations and Environment Canada, all the parties’ efforts resulted in the first ever EcoGift of a Canadian-American owned property. GBLT and American Friends now co-own the new preserve in the Point au Baril area.

Ian MacLeod, Chair of GBLT’s Land Protection Committee said, “Finding a way for Canadians and Americans who share ownership of environmentally important lands to receive favourable tax treatment is a true breakthrough. This has paved the way for more conservation because Canadian/American co-ownership is fairly common on the Bay. We are extremely proud of this accomplishment and grateful to EcoGifts and American Friends for their commitment to Georgian Bay.”