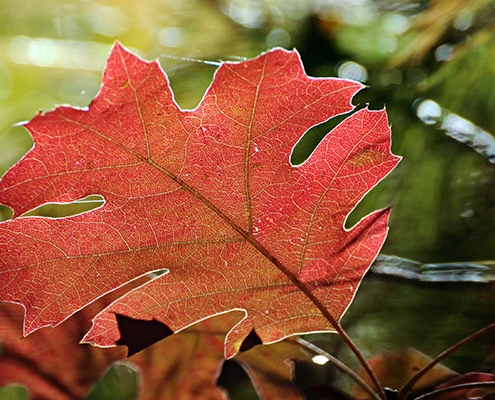 Every summer, three generations of the Lysne family travel from Minneapolis to Rainy Lake, Ontario to gather at Copenhagen Island, as two generations of their family did before them.  The tradition started in 1911 when Dr. Henry A. Lysne bought Copenhagen Island. It is located just north of the border between Canada and Minnesota, in an area beloved by citizens of both countries for its wilderness feel, pristine water and pine forests. In 2016, Kurt Henry Lysne, the family’s current patriarch and great-nephew of Dr. Lysne, permanently preserved Copenhagen Island by donating a conservation easement to American Friends in a transaction facilitated by the Rainy Lake Conservancy (RLC).

The natural character of Rainy Lake is partly protected on the US side by Voyageurs National Park. On the Canadian side, nearby Sand Point Provincial Park and adjacent Goose Island Natural Reserve are set aside for conservation. Copenhagen Island is surrounded by islands within the Rainy Lake Islands Conservation Reserve, established by the Province of Ontario. The area is also a protection priority for the Nature Conservancy of Canada.

The 50-acre island features increasingly rare red pines, rocky outcrops, and small wetlands that shelter several endangered plant species. The Lysnes share the island, its shores and surrounding waters with bear, beaver, pelicans, loons, renowned numbers of walleye, and the Lysnes’ many human guests. This tradition also started with Dr. Lysne who, together with friends from Minneapolis, traveled by train and boat to Rainy Lake for annual fishing excursions and an escape from the constraints of Prohibition in the US. Several of those friends bought neighboring islands, one of which was also recently protected by American Friends and RLC.

Copenhagen Island has been part of Kurt’s life since he was an infant. Great-uncle Henry and his wife Merceline, a “real character” according to Kurt, are part of his favorite memories. Kurt and his wife, Mary met on Rainy Lake. Their son Kristofer met his wife there a generation later.

The Lysnes know how easily the peace and beauty of a place can be destroyed. Kurt cites a 75-acre island that is now covered by 100 houses. “It’s busy, noisy, and polluted. There’s no open land for humans or wildlife. It’s not the ‘North Woods’ experience at all,” Kurt explains. He feels something very precious was lost.

For over a decade, Kurt and Mary sought a legally and financially realistic way to protect Copenhagen Island for their two sons and grandchildren; and everyone who loves this beautiful lake. American Friends’ special tax status in both the US and Canada made it possible for them to achieve their goals.

Donating the conservation easement provided the Lysnes with the emotional benefit of knowing Copenhagen Island will never be subdivided or developed beyond the area of the current buildings. In addition, eliminating future development will greatly reduce the substantial Canadian capital gains tax, which will be due when Kurt and Mary transfer the property to their heirs. That will make it easier to keep the island in the family.

The Lysnes’ gift to American Friends is tax deductible in the US. This tax benefit will be an important source of funds to finance future maintenance of the structures, some of which date to the late 1800s.  These incentives are American Friends’ unique tool kit which make its conservation success possible.

The Lysnes’ gift ensures that Copenhagen Island will be a refuge for nature in Rainy Lake, and the people who enjoy it. It is a gift to everyone who appreciates this place with its common wealth of protected lands. This is the power of American Friends’ work and partnerships.

(L) Some of Minneapolis’ most prominent citizens (all male) traveled to Copenhagen Island at the invitation of Dr. Henry A. Lysne (R).

Fishing and boating are part of the Rainy Lake tradition, but catch limits and styles have changed.