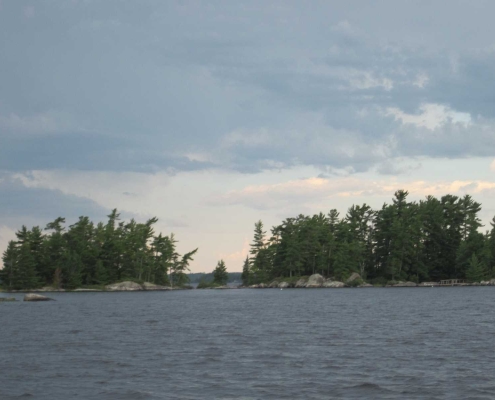 Echo Island is small, but its permanent protection can have a major impact on cross-border conservation in Ontario.  When this conservation easement was donated to American Friends in 2013, it was the first known instance of an American donor giving an easement over property in Ontario to a U.S. land trust. The gift provided a land protection road map for many other American owners of priority conservation properties in the province.

The Rainy Lake Conservancy (RLC), a small all-volunteer Canadian charity, facilitated the gift from the White family, originally from the Chicago area. Three generations have cherished Echo Island’s forest, shoreline and simple cabin over the last 50 years.  The current generation of the family was motivated by their desire to have Echo Island be part of future generations’ summer experience and to retain the pristine quality of Rainy Lake.

Echo Island is one of nearly two thousand islands scattered throughout Rainy Lake’s 345 square mile area (890 km2) straddling the border of Minnesota and Ontario. Voyageurs National Park is located on the southeastern corner of the lake on the US side of the Lake. The Boundary Waters Canoe Area Wilderness is also within the Rainy Lake watershed.

The conservation easement restricts future development, preserving Echo Island and also reducing its market value. The latter outcome reduced the Canadian capital gains taxes on the transfer of the property from one generation to the next. This can be a major problem for families who want to keep a property in their family, whether they are Canadian or American.

As a U.S. charity, contributions to American Friends are deductible against U.S. income, and can also reduce U.S. estate taxes. Carolyn Wallis, the point person for the family, reports that they are using the money generated by the US tax deduction to fund a permanent account for maintaining their modest cabin on Echo Island.

American Friends is a “prescribed donee” in Canada, meaning that land and easement donations are effectively not subject to capital gains taxes. This special tax status granted by the Canadian government recognizes that successful preservation of large landscapes that are shared by Canada and the U.S., such as Rainy Lake, depends on the generosity of citizens of both countries.