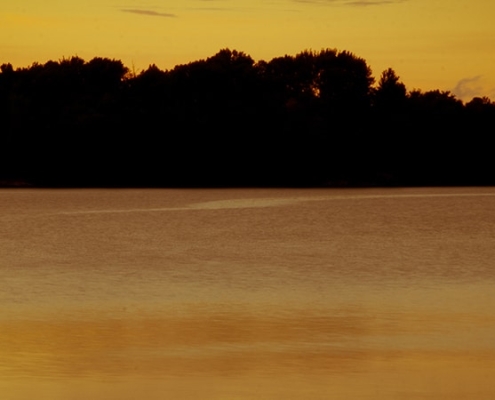 In 2017, Beth Hyatt was finally able to fulfill the dream her husband Henry had ever since the couple bought their three properties on Rainy Lake in Ontario.

Beth’s gift to Henry was the permanent preservation of French Island, the island across the bay from French Island and, most importantly, the 337-acre property at the end of Bleak Bay. It is across from Voyageurs National Park on the U.S. side of Rainy Lake. Beth donated conservation easements that limit or eliminate future development on these treasured lands to American Friends of Canadian Conservation.

Beth and her family raised their glasses to toast Henry, who worked tirelessly to protect the couple’s Canadian properties and Rainy Lake generally, before he succumbed to cancer in 2008. Beth recalls silently saying to Henry, “I am so glad I could get this done and achieve our dream.”

The Hyatts found French Island in 1994 after an extensive search for the ideal retreat location. Previously they had enjoyed Vermillion Lake MN but the mushrooming number of vacation homes there – with the accompanying noise, degraded water quality and changes to the community – caused it to lose its appeal.

Not long after the Hyatts acquired the idyllic property with its magnificent stone buildings from the 1930’s, a high-density second home development on 300+ acre Goose Island threatened the quiet pristine character of Rainy Lake. A group of Canadians and Americans had already been studying how to preserve Rainy Lake’s uniqueness, said Bill and Maureen Olson, who were both involved in the formation of Rainy Lake Conservancy. The subdivision plan catalyzed the group to oppose the development of the island. Bill Olson recalls, “Led by Henry, the first several years the Conservancy dealt with solving the Goose Island threat that had brought us all together.”

Goose Island was saved and became a provincial park. However, Henry and others who wanted to protect Rainy Lake realized they had to create a way for US owners to preserve their Canadian lands. US taxpayers own as much as 70% of the islands in Rainy Lake, especially in the area near the border with Minnesota and Voyageurs National Park. Therefore, a comprehensive conservation approach had to include Canadians and Americans alike. Most of all Henry wanted to secure the future of French Island and Bleak Bay.

A CPA by profession, Bill Olson says “We quickly discovered that mixing in two countries’ citizens, and two countries’ easement laws and tax laws made the process several magnitudes more complicated than we imagined. “It was so complicated that 15 years elapsed before Beth Hyatt was able to complete her easement donation.

As Beth gazes out over Rainy Lake she evinces both joy and sadness. She was thrilled to permanently protect their lands for the benefit of everyone who loves Rainy Lake. Nevertheless she wishes Henry was at her side to savor the success. But Beth is confident that he knows that she achieved their shared preservation objectives.